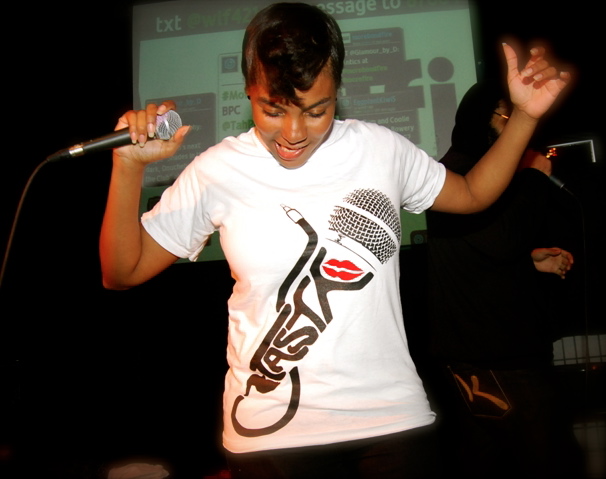 This is why I love collaborations! I’m inspired by the work ethic of many people who seem to be go getters – Tasty Keish is one of them. I haven’t had the priveledge of actually meeting her but I sense that she has her fingers in a lot of well made pies, lol.

I love the concept and design of TK’s ‘Showman’ t-shirt so had to give it some love on T-Shirt Tuesdays. Speaking about the design and collaborative effort, Keisha says:

“I’m on the air (Rise Up Radio WBAI_NY 99.5fm), I host live events, I write and do correspondent work for societyHAE.com, I host and produce my own webshow (Taste of The Town), all of which requires a significant amount of showmanship. Being a showman is about always being ready, having the drive and confidence to take destiny into your own hands and live it for the world to see. It’s funny because I’m noticing those traits in people that have purchased “The Showman” and I wouldn’t have it any other way…

The Showman tee is the very FIRST one. It’s by FUNKTHEFORMULA, two young designers from Brooklyn, NY (Colin Lawton and Mustahfah Greene). I had been hearing about their aspirations to start a men’s line, I really like menswear so I told them to keep me in mind when they got started, and they did. I modeled their first t-shirt and was so impressed by their drive and positivity I hit them up as soon as I thought of TK CLASSICS. I’m so glad I did, because I gave the designers full creative control to make something that captured what they percieve as “TastyKeish”. When I opened the email with the design, I almost cried. It hit me right in the heart. The attention to detail, from the mic head to the little things about me personally like the flip of the hair at the bottom of the mic. I’m so glad this is the first one.

Now, I know these guys almost like brothers and I would work with them again in a heartbeat. That was the purpose of the project, to create a deeper relationship between folks that normally wouldn’t have that.”