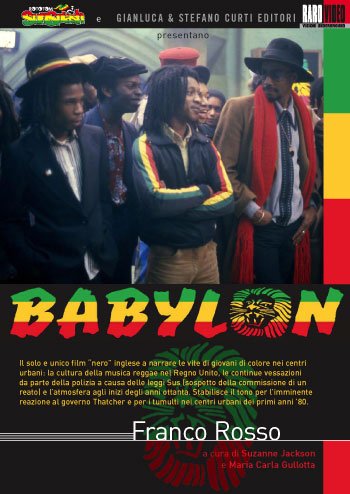 Last weekend I had a friend of mine drop into conversation with another person that I was going to be the female Spike Lee – it made me laugh. I can see it now, my version of Do The Right Thing…Radio Raheem walking down the street holding an ipod rocking a pair of Air Max 90s, lol.

This time last year at the BFI’s 51st Film Festival I was taking film advice from Forrest Whitaker (he has great taste in Sneakers and is also a vegetarian), so I was oh so eager to go back this year to see what they had on offer.

Made in the 80s, and set in Brixton, Franco Rosso’s Babylon was brought back to cinema for the first time since it’s release.

“Babylon revolves around the lives of a group of young black people in inner London, focusing on Blue, played by Brinsley Forde, car mechanic by day and  toaster for a reggae sound system by night.

Director Franco Rosso wrote the script with Martin Stellman (who also co-wrote Quadrophenia) but much of the script was developed, and written in Patois with the involvement of the young black people whose lives was the source material for the film.  Right from the start the mission of Babylon was to show what life was really like for poor young black people in inner London.

Not to be defeated Franco Rosso went on a long drawn out process that took the best part of five years to raise the cash to make Babylon into an independent movie.

Babylon may have been a low budget movie, but there is nothing cheap about it. The Cinematography was handled by Chris Menges – a man with a very impressive filmography before and after Babylon. From  Kes to TheKiling Fields, to The Mission right up to Notes  On A Scandal. Menges gives the film a classy but gritty portrayal of London, his shots of night-time and on the tube are especially vivid. His work on Babylon set the benchmark for other British films that want to give you hard realism, from Naked to Nil By Mouth right up to This Is England.”

It was creepy how parts of the film echoed today’s Black society and also to see that the Black dad from Hollyoaks was one of the stars (that was more funny than creepy, lol).

Finished off with a Q&A session in which some of the guys hadn’t seen each other in over 15 years, it’s definately worth buying when it comes out on DVD (which is today!)