I’d say in the past couple of years most of my time spent away has included less relaxing and more working (hence why my hand luggage consists of a shocking amount of electrical appliances). This Summer I’d planned to document the bachannal that is Grenada Carnival, or Spicemas as it’s often referred to. Interviewing artists, taking pictures, documenting each element of what comes together to be one of the most exciting times of the Grenadian social calendar.

My laptop and camera spent a lot of the time in my bag and my usual pangs of Internet addiction didn’t really hit me that hard – I think it was the heat. I managed to attend a lot of events but spent a lot of time jumping up and running from left to right trying to avoid the mosh pit at the front of the stage. The documenting I did do was of Jouvert in both Grenville and Sauters (where both sets of Grandma’s live).

Jouvert which means ‘dawn/daybreak’ happens from about 5am up until the early afternoon. Each Parish has its own and it’s pretty crazy – you wear old clothes as most people attending come home looking like an accident at a Dulux factory. Masses of people dance behind trucks with soundsystems on the back of them.

This year in particular the theme of Spicemas was ;Home of 100,000 Jab Jabs’. Jab Jabs, along with Shortknees and Vecko’s are different mas bands that are particular to Grenadian culture (and other island close by). Each year they parade around each parish and are a real sight to see. The first time I went to Grenada and saw a Jab Jab I was scared to death as they paint themselves from head to toe in tar (they use oil now) carry snakes and have helmets with horns coming out of them! I think this year Grenada wanted to bring back the essence of what Carnival really is hence the sub title of Spicemas this year ‘Uniquely Rooted in our rich ancestoral traditions’. I played Jab Jab this year with two of my cousins and it was a dope experience. People can’t seem to get enough of how scary Jab Jab’s look and make sure they stay out of their way, lol.

The week prior to Carnival is filled with various parties and also the Queen Show (which is a pagent similar to Miss World) and also the Soca Monarch finals in which a select number of Soca artists perform to an audience and panel of judges and prizes go to the people’s champion and over all champion. This year’s winner of both trophies and the grand prize of a car was Terror Kid with his infectious hit ‘Tsunami’…last year’s winner was Otis’s ‘Tornado’ so who know which weather related song it’ll be next year, lol. Every artist that performs has an intro video and Terror Kid’s was related to the end of the world with various videos of natural disasters around the world and then he came on stage dressed as Nostradamus…GAME OVER! The crowd went crazy and I’m surprised I lived to tell this tale – Grenadians know how to party boy!

As well as Terror Kid, Luni Spark & Electrify perfomed. They were the brothers who modelled the first batch of ‘iamthenublack’ tees. It was great seeing them perform and I also managed to get an interview with them after the hype of carnival was over (see…I did do SOME work). The evening after I arrived was Preeday which celebrated 20 years in the music business for one of Grenada’s most loved Soca artists Tallpree. Alison Hinds, Mr Killa, and Machal Montana also performed and put on a stellar performance.

The level out the partying I also attended the Grenada Diaspora Conference in St Georges as part of the UK Diaspora Youth Forum. I was unable to attend the first day but the second day saw various speakers talking about ways to help Grenada flourish in areas such as health and education. Also attending the conference were other youth groups from Toronto and New York who also gave reports on how they were promoting Grenadian culture in their various cities. It was interesting to hear views from the speakers as well as touching base with UK Grenadians who were also at the conference. I was seated behind Anthony C George who designed the Grenadian flag who mentioned how proud he was of the work that the young people had been doing which was a real honour – he’s definitely an icon of mine as a creative and a person of Grenadian heritage.

All in all it was a nice trip, the first one that I’ve truly relaxed on and just enjoyed my surroundings and drank A LOT of local juice (if you cut me I’m positive I’d bleed either mauby or fruit punch, lol). I’m glad that I’m able to have a connection with another place apart from England that has so much history to it that’s visible everytime I visit. I think the next trip will be a historical one. If you’re planning to visit Grenada I definitely suggest you do so, it’s not one of the most visited islands in the Caribbean which I think makes it extra special. Grenada to de WORLD! 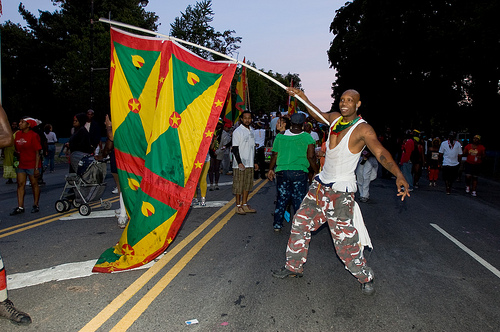