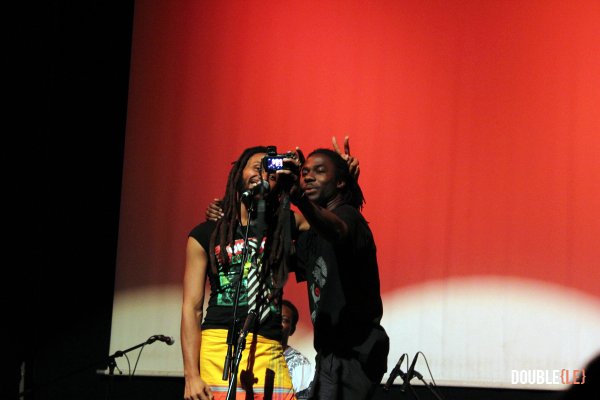 When only five of 15 musicians can play a gig because the others have had their visa applications denied for a festival that bills itself as helping you “discover the world and cross borders through music,” there’s a sad irony to it all. But one man’s border control is another man’s laissez passer.

On Tuesday 7 June, Ghanaian musician Wanlov the Kubolor took to the stage at the Rich Mix. Once the third act in a three band show, now headlining. The other bands – Kenya’s Winyo and Belo from Haiti, we’re told, are stuck in Italy, unable to gain access to the UK.

So it’s left to the self-professed ‘African Gypsy’ to entertain the crowd – and did he ever.

His motley crew take to the stage first: there’s a tall, thin and clean shaven Frenchman on accordion, an Italian/Transylvanian fiddler – fairly squat and heavily bearded – and a Ghanaian on the Cajo drum. Let’s just say I wouldn’t have made him out to be a musician. Then appears the glue that holds them all together. Wanlov saunters onto the stage in an yellow and orange kikoi, what can only be described as a black tank top, a stripped tie and red plastic aviators. My senses are crying foul and not a single note has yet been played.

When the music does start, it’s an equally disorientating experience. You’re never quite within your comfort zone. Genres that shouldn’t work together are woven into the same lyrical tale. It is part Lagbaja, part Gogol Bordello. But when I start to think this is a ride I need to get off, the drum kicks in and I’m back to bobbing my head to the rhythm, cursing myself for being so fickle, cursing the artist for being so darn brilliant.

Wanlov walks this fine line between the audacious and the absurd expertly. He takes his audience on trust and on a strong beat just far enough into alien territory then reels them back in again…until, just when you think it’s safe, he starts singing about squirrels. And about how to hit on girls – devoutly religious girls, Romanian girls, all girls.

But you’d be foolish to dismiss Wanlov on his appearance or his sense of humour. He is a consummate entertainer and an incredibly sensitive and intelligent musician. Throughout the gig, the pace builds and builds and each musician is given time to shine. This is music for music lovers. And before you get the chance to pigeon-hole him lyrically, he performs For the River, a song about pollution in Ghana’s rivers and Human Being, a beautifully melodic tune about being a global citizen.

By the end of the concert, I’m reeling. In one last act of generosity, perhaps for the audience, perhaps for his own amusement, he calls his friend and other half of the Fokn Bois crew M3nsa (well, what he actually says is: “man like menstruation”) on to the stage for an amped up version of Kelewele Pimping. The performance is infectious and ridiculous and I am left wanting more.

But it’s time to go and before he leaves, Wanlov gives a “special shout out to the visa control office.” And I am inclined to agree with him. Had the authorities not refused entry to the others, I may never have heard Wanlov and M3nsa sing the grammatically and politically incorrect “thank God I’m not a Nigerians,” among other delights.

Image of The Day: Water