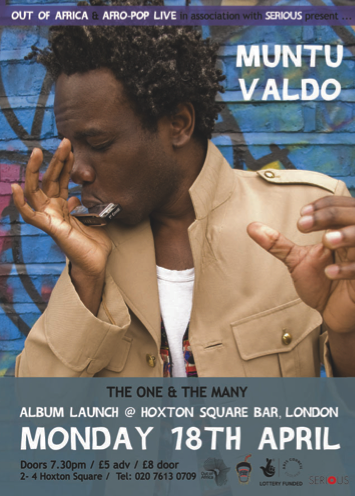 To celebrate the release of his new album ‘The One & Many’ Muntu Valdo will be performing at Hoxton Square Bar next month.

With The One & The Many, Muntu Valdo wills us to stand up and unleash the power of the many inside each and every one of us. A touchingly honest new album, Muntu Valdo has successfully pulled together a rich diversity of elements and environments, commanding us to recognise an artist deeply rooted in the riches of his culture whilst striving for modernity, open to and pushing towards the future.

Thenublack has been given a pair of tickets and a signed copy of Muntu’s new album to give away to whoever can answer the following question:

In which country was Muntu Valdo born?

E-mail your answer with either ‘tickets’ or ‘album’ as the subject to hello@iamthenublack.com Winners will be notified by April 14th.

The One & The Many is the much anticipated new album from one-man maverick musician Muntu Valdo. He has toured all over the world, from Paris to Douala, Womad UK to Mexico, London Jazz Festival to Singapore and back. He has played alongside some of the biggest names of African music new and old, such as Staff Benda Bilili, Ali Farka Touré, Keziah Jones, Tony Allen, Richard Bona and Manu Dibango (who was instrumental in encouraging Muntu to go ahead with this latest project), and has forged exciting new collaborations with the likes of cult folk visionary Alasdair Roberts and Damon Albarn’s Africa Express.

bookmark this: The Natural Hair Project