Driving down the M1 last night on the way to the first ever meetup for thenublack was some nervewracking stuff! What if nobody turns up? What if everyone’s forgotten? What if I can’t walk in my shoes? WHAT IF NOBODY TURNS UP???

Rule 1: Getting excited about confirmed guests on a Facebook list will lead to you feeling a tad gassed, lol. Whatever the reasons for the no shows were I won’t know but I’d say 25% of them did show and it was still a really great night.

Rule 2: Don’t assume every black person making their way towards your booth is here for your meetup. I did wave at two people who smiled at me – there weren’t here for the meetup but they were friends of someone I knew and we ended up swapping details. There was also another party going on for Yemi of Afro-Pop who took to introducing me to people as “HEY, thenublack come and meet….” Quite a lot of the people that came for his birthday were folks who knew about the event so we kindly shared each others guests.

Rule 3: NEVER EVER leave cupcakes uncovered…EVER. I decided to let folks try the lovely cupcakes custom made by Joelle of Lovebakes and they went super duper quickly (never got a chance to sample the RV flavour but from the looks of all the empty wrappers….). Once they were set up everyone came over to have a peek and a nibble. Biggest cupcake fan of the night was M3nsa who came for cupcakes, sweets, and badges – think he was a happy guy at the end of the night, lol.

Meeting people who were familiar with the blog and also people with whom I’d only had conversations with online but got the chance to meet face to face was really cool. Afripop, Tam+Sam, AfriLove, Superfab Rae and SoulCulture were just some of the bloggers in attendance. Womenswear labels Mei Kai and SANA London also came down. Inua the poet/graphic designer and Justina who have both been featured on the blog also showed their faces. M3nsa and London producer The Caligraphist also showed up.My sister isn’t a blogger and neither is my cousin but they came too, lol.

For me introducing thenublack to curious people that wondered over was another great moment. Everyone I explained the concept to loved it and wanted to know more (hold tight moocards for helping me promote the blog). I’m looking forward to featuring those who I met last night.

I hope those who came had an enjoyable night. I’m off to catch a few more hours of sleep and plan the next meetup. Hope you can come too!

(A very big thanks to the Saturday Nite Boogie DJ’s Bemi, Zak and Bunny for the music selection too – it was stellar). 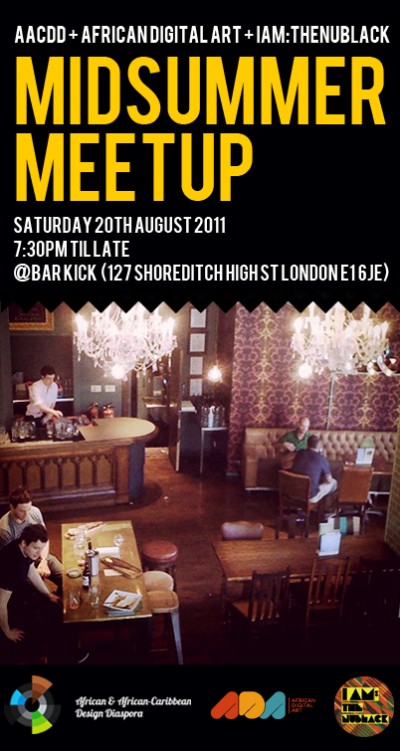