[Event] African Odysses at the BFI: A Hole in Babylon, Mangrove Nine plus first UK screening of Bob Marley documentary 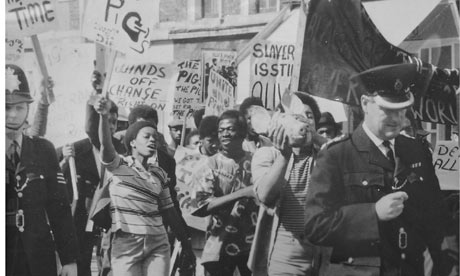 One of the great things about being a BFI member is that you get their monthly schedule in advance (I wasn’t paid to say that, promise, lol). Anways, African Odysseys takes place each month and is the BFI’s regular strand that features films with subject matter relating to the Black experience.

A Hole in Babylon

A fine TV drama based on actual events, when members of the newly formed ‘Black Liberation Army’ attacked the Spaghetti House in Knightsbridge, and a famous siege developed. Check for confirmation of Horace Ové’s attendance.

Re-released documentary from the director of Babylon, featuring the aftermath of a Notting Hill protest against police harassment which culminated in the arrest of nine people – including a young Darcus Howe – and a headline case at the Old Bailey.

Also showing at the BFI is Marley, documentary about musician and activist Bob Marley. Put on by Sonic Cinema the screening will be followed by  a special dub and reggae club night in the benugo lounge, featuring DJ Tayo and very special guest DJs.

The legends surrounding Robert Nesta Marley have grown since his untimely death in 1981. Kevin Macdonald’s authoritative documentary, made in collaboration with the Marley family, presents the extraordinary life story of the man who emerged from poverty in rural Jamaica to become reggae music’s first global superstar. Featuring revealing interviews with the people who knew him best, alongside exhilarating archive footage, some of which has never been seen before, Marley boldly succeeds in paying tribute to a man who achieved so much in his 38 years, and to the timeless music he left: ‘No Woman, No Cry’, ‘One Love’, ‘Exodus’ and many other great songs are celebrated here.

[Image of the Day] Ali & Fraizer