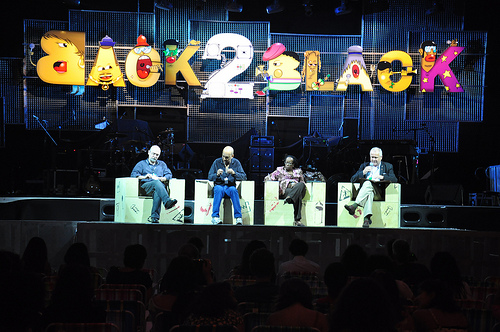 “We at the Barbican are thrilled to co-produce the first Back2Black festival outside Brazil here in London in the Olympic year. The festival theme of celebrating the strong African roots and influences which are so predominant in both the Brazilian and UK music and culture is  perfect for London and its diverse communities and even more so this summer, when the world’s eyes will be on our city.”

Hosted by and featurng Gilberto Gil the Back2Black Festival has been produced by the Barbican in association with Zoocom Events and Serious who are widely known for their stellar lineups during the London Jazz Festival.

This first London Back2Black festival features a strong emphasis on UK African connections and communities including Afro-Caribbean artists and brings together a heady mix of different traditions and musical genres, including Samba, Jazz, Funk, R’n’B, Blues, Rock, Reggae, Dub and  Hip Hop – all of which have been heavily informed by Africa.

Launched in Rio de Janeiro in 2009, the annual Back2Black festival has quickly established itself as one of the foremost cultural events in Brazil attracting over 35,000 visitors to date. A pioneer in promoting global appreciation for black culture in Brazil, this curated festival explores new ways of presenting music and art and aims to entertain, raise awareness, further cultural exchange and rebuild bridges, bringing Brazil back in touch with its African Heritage.

Since its inaugural edition, the Back2Black festival has taken place in the beautiful setting of the disused Leopoldina railway station close to downtown Rio de Janeiro. To recreate a similar setting, the London festival will be held at Old Billingsgate in the heart of East London, with four different stages and an extensive offering of concerts, debates and exhibitions. The eclectic line-up will feature more than 30 Brazilian, UK and international artists, groups, thinkers and leaders, including host Gilberto Gil. A large-scale exhibition by Brazilian artist and director Bia Lessa forms the backdrop of the festival.

For the full festival lineup check out the Barbican website

[Image of the Day] Grenada’s Underwater sculptures: A tribute to fallen African slaves